Pickleball Tutorials That Will Really Improve Your Game!

We love Primetime Pickleball’s great pickleball tutorials! Here is our collection of the best fundamental tutorials to really improve your game. Check them out!

Top 9 Basic Pickleball Strategy Mistakes & How To Fix Them

The 3rd Shot (The Most Important & Most Difficult Shot In Pickleball!)

How To Beat Bangers

How To Dominate The Net

1. Get up to the net! (the non-volley zone, NVZ); and stay there!
2. Stop and get into position before hitting the ball.
3. Be SMART, not fancy.

Top 9 Basic Pickleball Strategy Mistakes & How To Fix Them

You may be making any one of these top 9 basic pickleball mistakes and not even know it.  They’re easy to fix and will make a HUGE difference in your game.
Mistake #1. The “Wandering Server.”

Mistake #2. Standing at the baseline to return a serve or a return of serve.

A deep shot will cause you to back up and have to hit a short volley and will keep you from being able to come to the net. Play at least a couple of feet behind the baseline. If you have to come up to hit the shot, then you are well on the way to the NVZ.

A dead dink is a dink without purpose; a dink that causes no movement from your opponent. Your dinks should force you opponent to have to move around and change his direction and depth.

Mistake #4. Not holding your ground at the NVZ.

Don’t be so easily pushed back off the net! When a shot forces you back, come back up! Volley deep dinks rather than backing up for the bounce.

Mistake #5. Trying to win from the back.

Players who try to win with strong ground strokes from the baseline ( also known as “bangers”). Games are almost always won by the team that plays at the NVZ. Work instead on a 3rd shot drop to get up to the net.

Mistake #6. The Drive and Rush.

This is when a player hits a strong 3rd shot and rushes the net without being aware of where the other team is set up. Be mindful of the position of your opponents and the consequence of your drive. Rather than drive and rush, drive and assess.

Mistake #7. Being a spectator on the court.

After hitting the ball, rather than watching what happens, focus on getting into the right position for the next shot. Close any wide gaps between you and your partner.

Even if you don’t have a great backhand, habitually cheating to the forehand side or “running around your backhand” in order to hit a forehand shot is going to hurt your play in the long run. You will be far better off taking your backhand shots and and improving your game by not always being out of position to favor your forehand.

Mistake #9. Playing with too small margins.

In other words, trying to place shots too close to the line. Give yourself enough cushion on your shots, and you will win a lot more points.

Is your serve not as consistent or powerful as you want it to be?  One of these 5 Pickleball serving tips is probably the reason.  Fix these and you’ll nail it every time…
Tip #1. Don’t just use your arm or your wrist.
Tip #2. Don’t use an open stance while serving (both shoulders parallel to the baseline).
Tip #3. Develop a smooth low to high swing path.
Tip #4. Don’t start your serve with a large back swing.
Tip #5. Perfect your service “toss.”

The 3rd Shot (The Most Important & Most Difficult Shot In Pickleball!)

Three key things to think about when making that crucial 3rd shot:
First, it’s got to be a soft shot!
Second, make sure you have a low to high swing motion.
Third, make sure all your weight and momentum is going forward at impact with the ball.

Many beginners dink the ball with the paddle face held vertically open.

1st Key. The Grip: Use the continental grip. 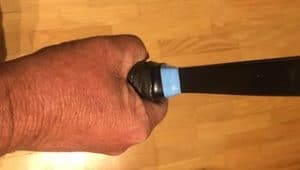 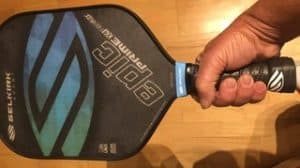 2nd Key. The proper Swing Path: low too high in front of your body.
3rd Key. Use your legs!
4th Key. Net Clearance.
5th Key. Hit it in the Kitchen!

How To Beat Bangers

How To Dominate The Net

This may be the best overall drill program for developing the 9 most important skills in doubles Pickleball! The skills needed for doubles mastery are:
4.7 / 5 ( 4 votes )