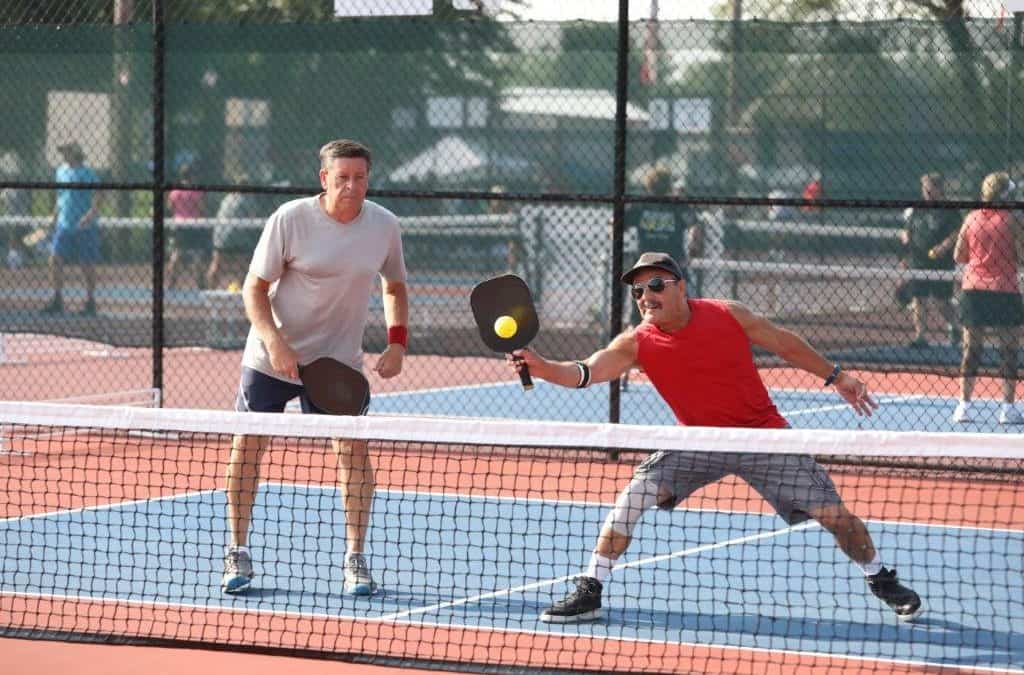 Pickleball is a sport that combines elements of tennis, ping pong, paddle tennis, and badminton. It is a sport that was born in the United States in 1965 but is now spreading throughout the world.

It is a very fun sport to play, easy to learn, and is played at a fast pace.

It is played with a perforated plastic tee-ball and a smooth and light pickleball paddle, and the game takes place on a net much like the one used in tennis.

It is usually played in teams of two people on each side of the court (doubles). However, some do play it individually (singles) which makes the game more difficult and challenging.

Anyone with experience in racquet sports will find it fairly easy to pick up the game of pickleball.

This means that initially, anyone can enjoy this game; it will not be difficult to keep returning the ball to the other side of the court. It is a much easier learning curve than tennis.

More advanced players take on the challenge of staying in a fast-paced, strategic, and more competitive game.

This is a fun game that does not require very high physical conditions and can be played at a much lower intensity than sports like tennis, and for this reason, pickleball is becoming very popular.

Why Choose Pickleball Over Tennis?

Tennis is a sport that requires a high and optimal physical condition. To play a tennis match, it is necessary to run much more than in pickleball.

The ease with which someone can start their first match also makes pickleball a very attractive sport and game. Those who practice this sport mention that they have a lot of fun with it.

Pickleball is a sport that is most commonly played with a partner (doubles), which makes for a much more social game that singles tennis.

Games as a couple become more communicative. The pair with the best tactics and strategy will win the game; that is, the responsibility for winning the game rests with two people.

While tennis also has doubles, the proximity of Pickleball players is much closer and communication both with the partner and with the other team is generally more social.

Advantages Of Pickleball Over Tennis

Pickleball has a much easier learning curve and can be picked up much faster by a beginner than tennis. And yet Pickleball quickly becomes a fast game that requires key movements and key strategies to win.

A tennis player will usually pick up Pickleball very easily. However, someone who plays Pickleball will not find it as easy to play tennis. For this reason, Pickleball is growing much more quickly as a popular sport than tennis.

Also, in pickleball, there is a much lower risk of injury than in Tennis. Tennis requires handling more complex techniques and having speed when running to reach the ball. This means that pickleball is easier than tennis.

In Pickleball, the risk is reduced because people do not travel long distances and stay in the same area of the court. Because the Pickleball court is considerably smaller, the risk of injury is reduced.

Since Pickleball is played on a smaller court than tennis, it is a much more accessible sport. This is especially true for younger children and older folks who’s mobility is more limited.

Rate this post
What Are The Health Benefits Of Pickleball?
Should I Upgrade To A Better Pickleball Paddle?

END_OF_DOCUMENT_TOKEN_TO_BE_REPLACED

Should I Upgrade To A Better Pickleball Paddl...

END_OF_DOCUMENT_TOKEN_TO_BE_REPLACED

What Are The Health Benefits Of Pickleball?